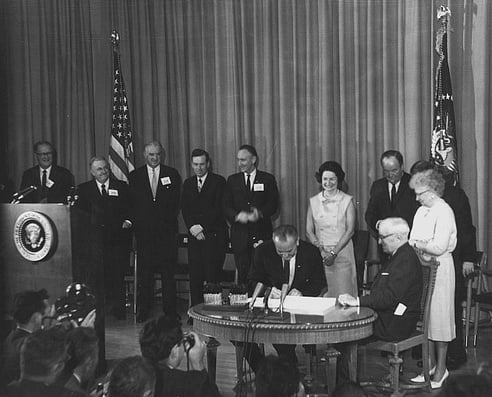 President Lyndon Johnson signs the law creating Medicare and Medicaid and, in doing so, dramatically expands health care coverage in America. The signing takes place in Independence, Missouri as part of a ceremony honoring former president Harry S. Truman, who, 20 years earlier, had first proposed the idea of national health insurance. A year later, when the new law actually goes into effect, Truman and his wife, Bess, will be presented with the first two Medicare cards.

Truman’s plan hadn’t been able to get through Congress--even though it was introduced three different times--mainly because the American Medical Association (AMA) had aggressively campaigned against it, calling government-funded health insurance nothing more than “socialized medicine.”

President John F. Kennedy had renewed the fight in 1961, announcing that national health insurance would be one of the top priorities of his administration. But he had been no more successful than Truman. Again, the AMA had vigorously opposed it, using a tactic that’s been described as one of the first successful viral marketing campaigns in American politics.

It hired a former actor named Ronald Reagan to record an album titled “Ronald Reagan Speaks Out Against Socialized Medicine” and sent it to all of the AMA’s “lady auxiliaries” around the country—these were local organizations made up of doctors’ wives. An accompanying note asked the women to invite friends over, “put on the coffeepot,” and play the record for all to hear. Then, it was suggested, that they might want to follow up by writing personalized letters opposing national health insurance to their congressmen.

Reagan’s script for what became known as “Operation Coffeecup” didn’t mince words. It warned that government –subsidized medicine would curtail Americans' freedom and that "pretty soon your son won't decide when he's in school, where he will go or what he will do for a living. He will wait for the government to tell him."

It ended with him saying that if this kind of health insurance wasn’t stopped, “one of these days you and I are going to spend our sunset years telling our children and our children’s children what it was once like in America when men were free.” The recording not only spurred a groundswell of letter-writing, but it also helped to launch Reagan’s political career. It led to an invitation to be a main speaker at the 1964 Republican National Convention, which nominated Barry Goldwater as the party’s presidential candidate.

But Lyndon Johnson’s landslide victory over Goldwater had given him the political muscle to push through legislation providing health insurance for the elderly and the poor—almost half of the Americans over 65 had no insurance and many had little or no savings. Johnson, who knew how Congress worked as well as anyone did, kept up the pressure to make sure the proposal didn’t get stalled again.

In a recorded phone conversation with Rep. Wilbur Mills, head of the powerful House Ways and Means Committee, Johnson lobbied hard to keep the legislation moving. He warned that if the bill was allowed to lay around, “that gets the doctors organized. Then they get others organized.” Johnson also compared festering legislation to a “dead cat,” and implored Mills, “Don’t let dead cats stay on your porch.”

In the spring of 1965, the House of Representatives passed the bill by a vote of 313-115, and the Senate followed suit in July. Within a year of Johnson signing the law, almost 20 million people signed up. Today, close to 50 million Americans are covered by Medicare.